In 1999 Egmont Group celebrated Anders And & Co’s (Magazine) 50th anniversary. Through their agency Wibroe, Duckert & Partners Thomas was hired in to give the campaign a ‘twist’.

Not necessary! was his first comments when Egmont presented their ideas which basically was to release a birthday issue with merchandise backed up by a big TV campaign.

Save the money! he continued.

You have a very good story to tell. Donald Duck is the biggest cultural influence in Denmark after WW2. Tell the Danes that!

His strategy was simple…

The message got through everywhere: Prime time specials on all national TV Stations, front page headlines on all dailies (major daily Politiken came out in a Donald Duck edition on the day), National Radio P3 broadcasted an hour long radio special and when Tivoli (Fair ground) invited all kids in Copenhagen to eat Europe’s biggest birthday cake, CNN covered the events.

The campaign never proved its true potential: the birthday package sold out on the first day of its release – a sales increase of 60% over the average weekly sale and 25% over Egmont’s own optimistic forecast.

The campaign was a huge corporate success. And as the costs were considerably lower than Egmont’s original planned TV advertised sticker-badge-magazine birthday package the anniversary became a huge commercial success as well.

Keep it simple & don’t be shy! 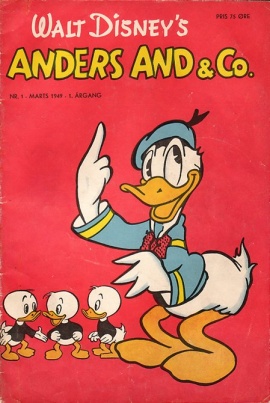